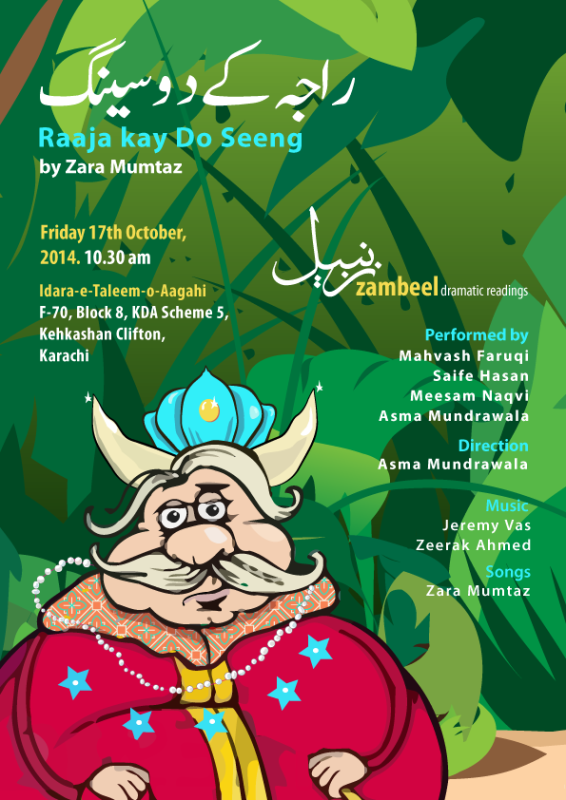 Another cheerful story for children by Zambeel Dramatic Readings!
In Raaja kay Do Seeng, meet an arrogant Raaja who is punished by the wicked witch, a scheming Vazir whose plans go awry, a Barber who can’t keep a secret and a witch who sets out to teach everyone a lesson or two.
Will the Raaja come out of this terrible mess? Will the Vazir save his neck during the Raaja’s birthday celebrations? Will Bubbun Hajjam manage to keep a heavily guarded royal secret?
This amusing tale with plenty of fun and laughter inspires thought amongst young listeners on the worthiness of truth and the evils of arrogance.

Supported by live music composed by Danish Faruqi and played and sung by Jeremy Vas and Zeerak Ahmed, the sparkling tunes will make audiences want to tap their feet.

Raaja kay Do Seeng engages listeners of all ages through the strength of the storytellers and the freshness of its approach.
Originally inspired by a folktale, Raaja kay Do Seeng is written by Zara Mumtaz, who is well known by young and old for her endearing stories for children. The writer has also written all the songs for the story.